Manny Pacquiao, considered by many as the greatest boxer of all-time, is a modern-day role model, and benchmark of how far perseverance and determination can take a human being. His training regimen and work ethic is second to none, as evidenced by his live training sessions whenever he has a fight coming up. He remains as boxingâ€™s only eight-division world champion, having won a total of ten world titles, and also continues to have the distinction of being the first fighter to win world championships in four different weight classes.

Fans all over the world have been drawn to him because of his humble demeanor despite his legendary boxing status. Even celebrities, who are noticeably present in any huge Manny Pacquiao fight, cannot help but express their admiration to the boxing superstar from General Santos City, Philippines. Indeed his God-given talents are matched by his humility and down-to-earth persona.

To say that Manny Pacquiao earned his current reputation and status is an understatement. He clawed his way starting from childhood, shadowed by a life of extreme poverty living in the Southern Philippines. At 14, he made his way to the Countryâ€™s capital of Manila, and even lived on the streets for a time. He began his amateur boxing career, with the Philippine National Amateur boxing team, where he no longer had to live on the streets, as the government subsidizes the national amateur boxing teamâ€™s board and lodging expenses. He would rack up an amateur career of 64 fights with 60 wins.

Pacquiaoâ€™s early professional career showed flashes of exciting potential with his undeniable punching power. It was when he faced Mexican legend Marco Antonio Barrera in November 2003 that people started taking notice of Pacquiao. This Manny Pacquiao fight with Barrera was the first real chance he had to show the world just exactly who Manny Pacquiao was as a fighter and boxer. He defeated Barrera in his hometown of San Antonio, Texas, via technical knockout, despite overwhelming odds, handing the Mexican fighter the only knockout loss of his career. He would later on continue to win huge boxing matches, in exciting fashion.

With his evident mastery of Mexican fighters, he even gained the moniker â€œThe Mexicutionerâ€, having disposed of top Mexican names including Barrera, Erik Morales, Oscar Larios, Juan Manuel Marquez, David Diaz, and even Oscar â€œGolden Boyâ€ De La Hoya, who Pacquiao considered as one of his idols growing up. De La Hoya literally threw in the white towel after eight rounds due to Pacquiaoâ€™s barrage of damaging punches and blows to the Mexican superstar. This Manny Pacquiao fight is widely considered as his break-out party as one of boxingâ€™s super elite. 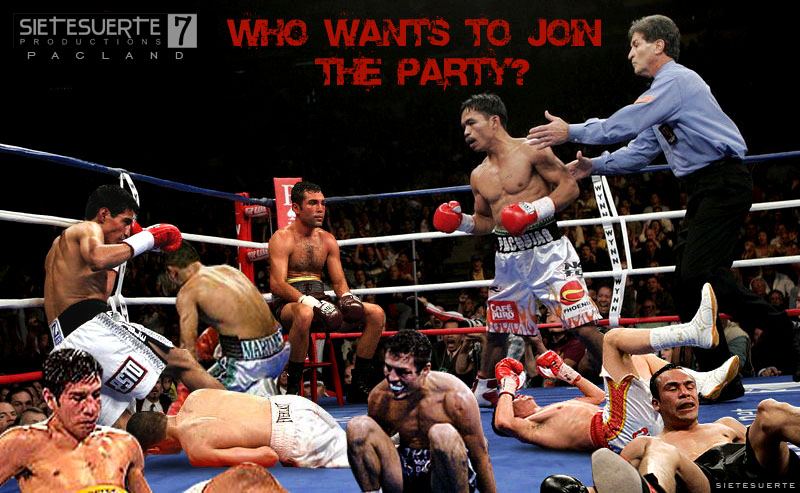 With Manny Pacquiaoâ€™s boxing legacy intact, and a place in the Hall of Fame tucked under his belt, one match remains as the final chapter in his legendary boxing career; the one against Floyd â€œMoneyâ€ Mayweather. It remains as the one match everyone wants to see, and would settle the score of who really is Boxingâ€™s pound for pound king.