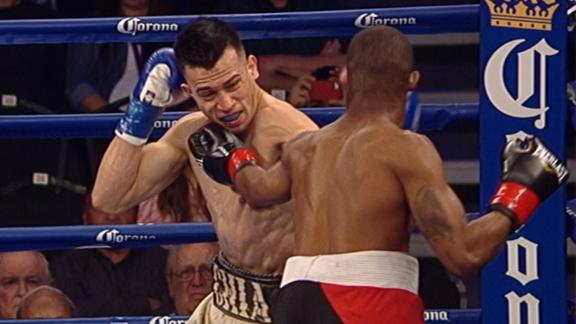 Fight Highlights:Â Mena down twice in round one

Coming in this fight Kendal Mena was the undefeated fighter with an impressive record of 20 Wins and 11 KO, While Â Santana’s record is 21 wins 10 of these wins are by Knock out but he was already beaten 3 times and got KOed once.

Round 1 Mena started the round using his speedy long jab, good shot to the body by Mena but Santana comes back with hard right hand, Mena continue fight from distance, Santana landed a left hook, Mena landed left and right but Santana countered him with a hard left hook that sent Mena to the canvas for the first time in the fight, Mena beat the count and fight continues, Left and Right combo punch landed for Santana, Mena tried to answer with combination but Santana countered him again with powerful left and right combination
Mena went down again for the second time in the fight this time his back was flat to the canvas his eyes are open but he’s not moving for few seconds Referee stopped the fight.

Official timeÂ 1 minute and 43 seconds in the 1st round Â Francisco Santana won the fight by KO, Santana improves his record to 22 wins with 11 KO