SHANGHAI, CHINA â€“ Randy Petalcorin of the Philippines captured the WBA Interim junior flyweight title here tonight by scoring two knockdowns en route to stopping Walter Tello of Panama in the 7th round at the futuristic UFO-shaped Mercedez-Benz Arena in front of 5,000-strong Chinese crowd and inspired by the presence of Filipino boxing hero Manny Pacquiao in attendance.Â Petalcorin fought a measured fight throwing accurate combinations and piling points to dominate the Panamanian on the scorecards. The less busy Tello made the fight a bit interesting only in round two and four when he scored with overhand left and rights. In the fifth round Petalcorin started to put Tello on the defensive by unloading left-right combinations on the retreatring Panamanian. 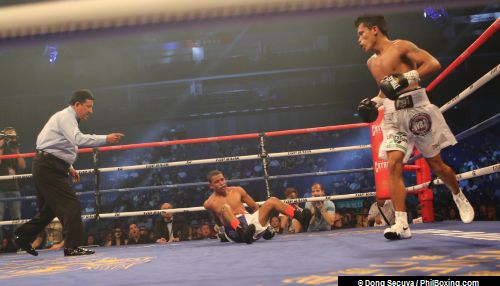 The end came in the 7th round when Petalcorin scored with a telling left uppercut to the jaw of Tello that sent the Panamanian to the canvas for the first time. Petalcorin followed it up with another devastating left uppercut that sent Tello crushing down to the canvas for the second time. Referee Raul Caiz Sr waved of the fight after seeing Tello unfit to continue. Â Read Full Story >>>